There are many diseases that we can get from pets, so we must inform ourselves very well about them. In the following article we inform you about the infection by Campylobacter that is present in dogs and can cause diarrhea, among other consequences.

What to know about the infection by Campylobacter

One of the main causes of diarrhea is Campylobacter infection, which is among the most common food poisonings . It can affect millions of people each year, especially babies, adolescents and young adults who live in precarious hygiene and cleanliness.

The genus Campylobacter is composed of several bacteria (such as Jejuni , Coli and Fetus ) and is common in farm animals or pets. These microorganisms, which are elongated, require low levels of oxygen to survive and do not move on their own, lodge in the intestines and then are eliminated through the faeces.

The contagion is caused by the intake of water or food contaminated with these bacteria. Another way to become infected is to be in contact with fecal remains of a sick person, such as a mother when she cleans her baby. 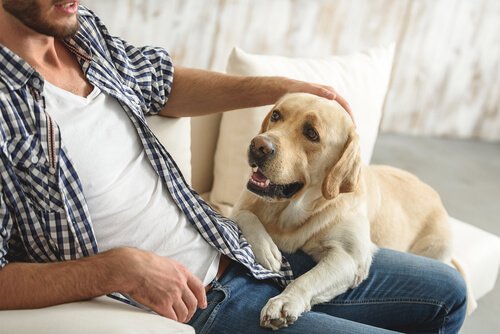 Which are n the symptoms of a Campylobacter infection

The main symptoms of a Campylobacter infection start from two days after the bacteria enters the body. We can differentiate into two large groups the diseases caused by it:

They are caused by two bacteria Campylobacter : Coli and Jejuni . They heal at about 10 days. The most well-known symptom of this infection is diarrhea . It also causes inflammation of the bowel, fever, abdominal pain, headache, nausea, vomiting and malaise.

They are mainly caused by Campylobacter fetus and are less frequent, although more serious. It can affect the heart and blood vessels , and cause endocarditis and pericarditis. Also extraintestinal diseases cause a neurological disorder known as Guillain Barré syndrome, urinary tract infections, pancreatitis and arthritis.

When some of the symptoms indicated above are identified, and we are aware of the contact with a dog or a farm animal -and more specifically of their feces-, we must go quickly to the doctor .

Some professionals indicate a blood test to determine if there are alterations in the white blood cell count or in the blood pH . You can also perform a microscopic examination of the stool or a blood culture (of the blood).

Once Campylobacter infection has been diagnosed, the next step is to comply with the treatment suitable.Keep in mind that children under two years, the elderly and immunosuppressed are the groups at risk against this type of bacteria.

Can you prevent an infection of these characteristics Having pets at home? Of course yes. Hygiene is essential, so it is recommended to wash your hands thoroughly after playing with the dog or cleaning the feces

It is also necessary to disinfect those objects that may be contaminated by infected feces of our pets, wash the food we eat well, not drink water from rivers or streams if we are on vacation and avoid the consumption of unpasteurized dairy products.